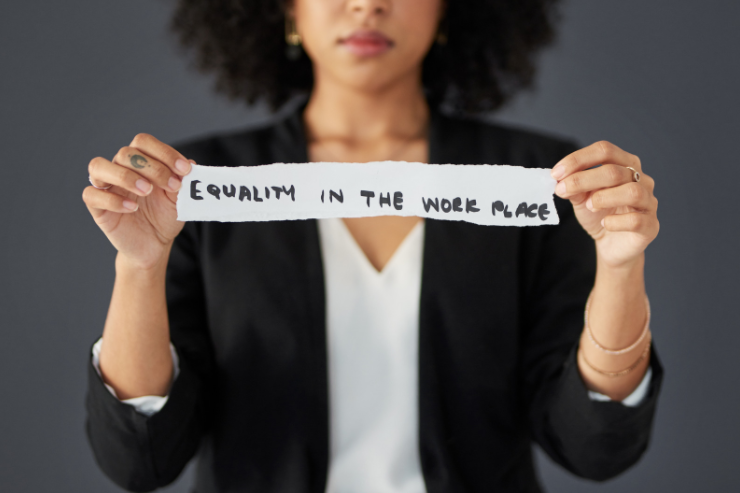 The U.S Bureau of Labor Statistics reported the wage gap between women and men has narrowed over time: women working full time earned 62 percent of what men earned in 1979 and 81 percent in 2018.

Gender wage inequality has impacted women as a whole but has had a more severe effect on women of color.  Family- friendly policies might play in reducing the gender gaps in workforce participation and earnings in the United States, we focus on three key

family- friendly policies: paid family leave, childcare, and work scheduling flexibility. After childbirth, mothers often face loss of pay resulting from having their work hours reduced by employers as a penalty for having competing priorities—motherhood and employment. Scheduling conflicts with unaccommodating child care providers are also a factor. Women, particularly those from low-income households, face barriers to economic opportunities. Accessing resources such as affordable housing, medical care and food stamps are often a challenge. For many women, difficulties with accessing medical care, paid paternity leave and high quality child care result in economic constraints that exacerbates the wealth gap among women. Expectant mothers experience unique struggles in the workforce, which often leads to fewer opportunities to earn an equitable income.

While women have made much progress, they are still underrepresented in occupations with the highest earnings such as finance, science, technology, engineering, and mathematics.

Many women in professional jobs remain employed in traditionally female occupations such as nursing or K-12 teaching that are generally less lucrative than traditionally male professions.So-called women’s jobs, which are jobs that have historically had majority-female workforces, such as home health aides and child care workers, tend to offer lower pay and fewer benefits. To the extent that college-educated women are still positioned below college-educated men in the overall wage distribution, women are still at a disadvantage due to lack of  work experience. Women benefit from attaining higher education because it provides the skills and experience needed to obtain a high-paying occupation and to negotiate an equitable salary. From January 2015 through December 2017, 3.0 million workers aged 20 and older were displaced from jobs they had held for at least 3 years; women accounted for 44 percent of those displaced. Labor market outcomes were similar for displaced women and men. However, women are less concerned with stressful economic barriers they face such as a lack of affordable housing, child care, work flexibility and food security.

Personal attributes and human-capital resources account for only a limited portion of the gender pay gap in public and private sectors. By contrast, occupational segregation and working hours account for greater portions of the gender wage gap. Working women typically want to be seen as good mothers and wives, a quality measured by their duties and responsibilities within the home. These duties also seem to be a source of their economic hardship. Because women tend to work fewer hours to accommodate caregiving and other unpaid obligations, they are also more likely to work part time, which means lower hourly wages and fewer benefits compared with full-time workers. Relative wages began to rise sharply in the 1980s, with a continued, but slower and more uneven rate of increase thereafter. By 2014, women full-time workers earned about 79 percent of what men earned on an annual basis and about 83 percent on a weekly basis.

Percentage of Male Earnings Women are Paid, by Age

The typical woman in America earns $45,097, while the typical man makes $55,291. Women working full time in the U.S. make 82% of what men do. And collectively, working women lose out on more than $500 billion a year. Moms earn only 71 cents for every dollar paid to fathers, which translates to a loss of $16,000 annually. Discrimination bias is a contributing factor to the gender wage gap because employers in higher occupational positions seek men with more qualified background and experience.

Over time, women have progressed to earn more degrees than their male counterparts yet hold nearly two-thirds of the nation’s outstanding student debt — $929 billion. Despite women’s aspirations of progressing in high professional careers, the gender pay gap resonates within every occupation women pursue. Fifteen of the highest-paying jobs are dominated by men and fourteen of the lowest-paying jobs are dominated by women. Occupational segregation is still relevant in today’s workplaces and companies need to implement pay fairness policies to hold employers accountable for their biases and accommodate working mothers.

The labor market divides women and men on the basis of gender in the public and private sector occupations. In the year following childbirth, women’s likelihood of employment decreases by 30 to 40 percent. Women also stay out of the labor force for longer than men; this differential is narrowing, though, because women are taking shorter leaves. The educational qualifications of men and women have converged. In fact, since the 1980s, the gender gap in college enrollment in the United States has shifted in favor of women because of an increase in women’s educational attainment coupled with the growing disinterest among men to pursue a degree.

Globally, women are vastly underrepresented in leadership roles. Gender equality is a human right, but the gap persists in the opportunities and decision-making power...
Read more